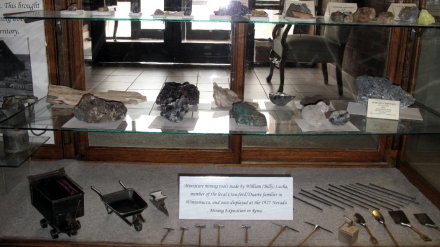 Mining with its history and traditions.  Louis Barbeau in 1861 has been credited for having brought the first valuable mineral in Humboldt County to the attention of the public.  This brought early settements and principal mining districts to a previously unknown territory.

Miniature mining tools made by William (Billy) Lucha, member of the local Crawford/Duarte families in Winnemucca, and once displayed at the 1927 Nevada Mining Exposition in Reno.

Early lamps beneath the earth's surface replaced the candle with carbide-acetylene technology in the late 1800's.