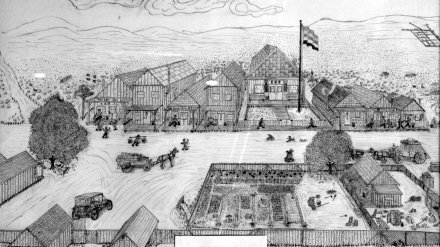 As a young boy, my family and I lived in Winnemucca's Chinatown on Baud Street.  It had a population of about 400 Chinese, who were practically all railroad workers.  Surprisingly, only four of the 400 were women.  When the Pacific Railroad was completed in May 1869, many of them had to move to seek work elsewhere.

Almost all of the buildings were built of wood and consisted of rough wooden 1 x 12s for siding, 2x4s for framing, and battens to cover cracks.  One exception was a single adobe house.  Its foundation consisted of adobe blocks, which were excavated from the very hill on which the house sat.  Also, due to financial conditions, about half of the roofs consisted of old flattened coal oil cans instead of wood shingles.  This was most convenient because coal oil was used for all lighting purposes due to the unavailability of gas or electricity.

In front of the first building on the left in the sketch is Ti Loy Jan.  The building is owned by Mr. Wong Git who dealt in herbs and Chinese staple foods.  He was also the depository for gold dust, which the Chinese brought in for safekeeping.  The gold dust was measured by a small cup and not by weight.  His son, Wong Jim, is playing "Kick the Feathers" with Lew Gum Fot and Wong Pon, who later owned the Gem and Crystal Cafes.  The two-story building on the right of Ti Loy Jan was owned by Mr. Tom Sing Ling, who was the interpreter for the community. On the right of Tom Sing Ling is Quong Chong, a Chinese merchandising, boarding and gambling house owned by Mr. Lee Dong Chue.

On the right of Quong Chong was a two-story boarding and gambling house built by two brothers, Ni Ngow Him and Ni Ngow Due.  There is a little humor about this house. The brothers framed the first floor and nailed 1"x2"x16' siding to it.  This left 8' of siding without support and most of the siding was splintered in the wind during the night.

The Joss House in the center was built in 1902 to serve the community as a place of peace, worship and celebrations.  The barbecue kiln, which can be seen along the side of the Joss House, was used on certain holidays such as Ancestral Birthdays and Chinese Diety days.  On these occasions, one whole hog or sometimes two were barbecued and a slice was offered to each person.  Dr. Sun Yat Sen, the first President of Nationalist China, visited and spent a day in this hall in 1911.

To the right of the Joss House was an adobe house owned by Mr. Soo Hoo Wing, which was used as a boarding and gambling place.  To the right of Soo Hoo Wing is Wong Sing's store.  Besides gambling and boarding, he also dealt in fresh fish and vegetables, which were shipped weekly from Tung Sung Company of Sacramento, California by Wells Fargo Express.  He also made Chinese doughnuts and pastries for special holidays.  A group of gamblers can be seen queuing from Wong Sing's to Mr. Pan Ah Jeong's house on the right to continue gambling.  Each establishment was only allowed to operate one hour consecutively from house to house, which was a decree of the community elders.

Meanwhile, the McDermitt-Winnemucca stage is patiently waiting in front of the Chew residence for Grandma Low, as it will take her home to McDermitt.  Archie and Helen Mangan, the children of Dr. J. P. Mangan, are seen crawling through a hole in the wire fence to play with the Chew boys who are seen racing down Baud Street. Jimmy is on the tricycle with Frank and Rover bringing up the rear.  Also, Father Chew Yee is hard at work delivering his load of vegetables.  He will balance his load all the way to the Humboldt Hotel for Mr. Germain's tables.  After making his delivery, he might return to work in his garden or may go prospecting for gold in the nearby hills.  At the same time, Mr. Lee Sum is coming from the opposite direction on his way to the boarding houses.  He is bringing fresh fish that he caught in the Humboldt River and vegetables which are from his garden, which is on the east side of the Humboldt River near the bridge, and where he has been farming for years.  It also seems that Mrs. Rutherford's cow is calling for attention.  Mr. Charles Sheehan, the President of the First National Bank of Winnemucca is somewhere consulting attorney Mr. Sam Bonnifield while his 1904 Buick is waiting for his return.

The Wells Fargo Express agent is delivering a load of fresh produce.  On his wagon are 12' boxes, which are bound with bamboo and filled with sugar cane.  To complete his load are crates of oranges and grapefruit, all of which are imported from China.

Mr. Lew Hay Sing, or better known as Lew Toy Wing, owner of Quong On Lung, brought his wife from China and raised a good-sized family after we moved.  To the right of Quong On Lung was a store named Sing Kee owned by two partners, Mr. Gee Way Mon and Jeong Song.  It was a curio shop dealing in Oriental wares.  To the right of Sing Kee were a few boarding houses, one owned by Lee Leong; the other's owner is unknown. Behing Quong On Lung there are a row of houses.  The first house was occupied by Lew Gum Fot and his parents; the second by Mr. Jenning Sing and her daughter, Ah Ping; and the last by Mrs. Dip Lee who was the community's midwife.