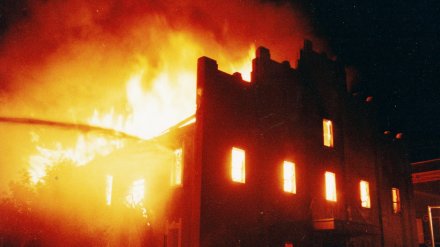 Nixon Opera House ("Nixon Hall") was built in 1907, and burned down in 1992. It was financed by George S. Nixon, a local banker who went on to serve in the U.S. Senate. When Nixon died, his widow Kate tried unsuccessfully to reclaim the property from the City. The arsonist or arsonists who destroyed it were never brought to justice.

The Nixon went through several face-lifts, during the years. Its brick exterior was stuccoed, giving it a Gothic look. Then, a plain false front was added during the 70s. The photos below show the building in its various phases. They also show architectural details from inside, Mr. and Mrs. Nixon, and Nixon Pool, the municipal swimming pool that once shared the same lot.

An effort to restore Nixon Hall was underway in the early 1990s, just before it burned to the ground. Today, the pool and opera house are both gone, replaced by the Winnemucca Convention Center.