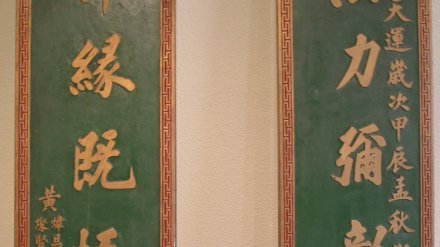 A thriving Chinese community existed in Winnemucca when many Chinese settled here after the completion of the Central Pacific Railroad.  In 1902, a red brick adobe Joss House was built and the Altar contained these two tall wood panels with lettering. The Joss House was once the center of Chinatown cultural life.  Chinatown with a population of 400, and few Chinese women, was gone by 1955.

"The Gods can fully manifest the strength and ability through the spirit even to the most distant places."

"The wisdom and knowledge of the Gods far exceed what men know."

(The small symbols are dates and names)