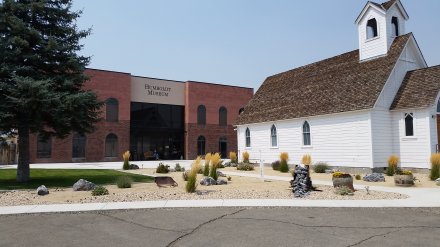 The Humboldt Museum opened in the former Episcopal Church building May 1977.  The Humboldt Museum's ground floor of the brick building was completed June 5, 1985.  The architect was J. D. Long.  Phase two, the second story, was finished in 2001 with a loan from the USDA/Rural Development Authority.  The two-story building houses an automobile collection on the main floor and a variety of collections upstairs.  It also houses the Weigand Audio Visual room, gift shop, library and staff office space.  The E. L. Wiegand Foundation was established in 1982 in Reno in memory of Mr. Wiegand who was widely recognized throughout the electrical heating industry as a result of his pioneering genius and achievement.  The Wiegand Foundation gave $31,000 for the audio visual room.