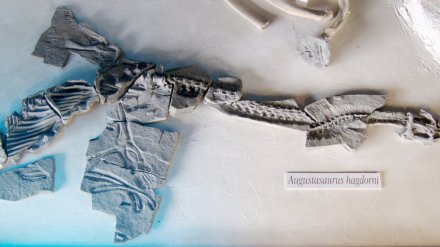 Augustasaurus hagdorni from North Central Nevada is a new marine vertebrate fauna.  The closest known relative is known only from a single specimen found in Germany.  Interestingly, both are about the same age. From the Middle Triassic, Augustasaurus hagdorni is 235 million years old and best described as related to but distinct from plesiosaurus.

The Augustasaurus hagdorni was found in the Tobin Range by Olivier Rieppel of the Field Museum of Natural History, Chicago. Dave Boyles and his son Quintin packed the specimen out on horseback in 1997.

After preparation, the specimen was analyzed and concluded to be a new genus. The Field Museum has donated a cast to the BLM for exhibit. This cast shows the skull, forelimbs, spine and rib cage.

A permanent display, entitled "Giant Swimming Reptiles of the Ancient Seas", which includes the Augustasaurus hagdorni cast, was completed in August 2015.