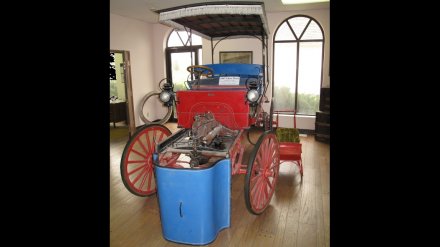 1907 Chase truck.  Featuring a three-cylinder, two-cycle engine and a tailgate and was originally used for hauling.  This vehicle was made by the Chase Motor Truck Company of Syracuse, New York.  When it had outlived its career as a utility vehicle, a surrey top was added and it was used primarily in parades.  And while it hasn't been started in a long time, it was in running condition when the Museum acquired it from the Stoker Collection.

If the serial number 32 is correct, then that makes the Chase Model D one of the earliest Chase vehicles.  That would make it a 1909 or earlier model.

The Chase Model D truck was the middle model in the Chase truck line.  It had a 1500 pound load capacity and was more of a light duty delivery truck.