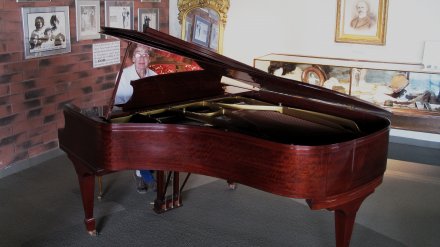 From a definite past, the Nixon Opera House brought the elegance and the charm of theatrical history to Winnemucca until arson destroyed the building July 23, 1992.  The Nixon Opera House was designed and constructed by Winnemucca contractor and builder D. I. LaPoint at a cost of $50,000 and was completed in March 1908.  The building was dedicated July 17, 1908.  George S. Nixon made his home in Winnemucca where he organized the First National Bank in 1886 and was a U. S. Senator from Nevada.  He had built and donated the Nixon Opera House to the City of Winnemucca as a parting gift to his home city.  This museum's beautiful Knabe grand piano, which was acquired in the 1940's, served for many years in Winnemucca's Nixon Opera House.  When an arson-caused fire destroyed the building in 1992, the piano fell through the stage floor into the basement below. In an amazing testament to the quality of early, built-in-Baltimore Knabe pianos, it was able to be fully restored. Notes Museum Director Pansilee Larson, seen here playing the instrument, "If it could talk, this piano could tell us who burned down the Nixon."  Piano recitals are held at the museum.