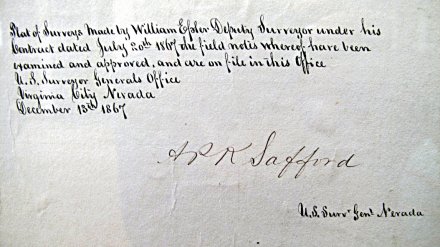 The plat of surveys was made by William Epler, Deputy Surveyor under his contract dated July 20, 1862, the field notes whereof have been examined and approved and are on file in this office.  U. S. Surveyor General's Office.  Virginia City, Nevada.  December 13, 1867.  A. P. K. Safford, U. S. Surveyor General Nevada.