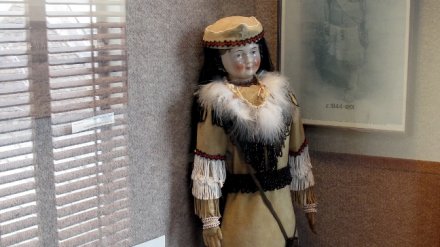 Sarah Winnemucca, daughter of Chief Winnemucca of the Paiute, was born in 1844 near Humboldt Lake, NV. Sarah became a very well-educated woman and spokesperson for her people. In 2005, a statue of her by sculptor Fredrich Victory was added to the National Statuary Hall Collection in the U.S. Capitol.

After serving as an interpreter and guide during the Bannock War (1879), Sara began a nationwide lecture tour about the Paiute. She was often referred to as "Princess" in the billing she received on these tours. In 1882 Sarah married L. H. Hopkins in Montana.

Sarah wrote "My Life Among the Piutes, Their Wrongs and Claims" in 1883. Her book is a history of the Paiute from their first encounters with the white man, their removal from their ancestral lands, and the wrongs they suffered at the hands of some of the Indian agents.

In 1884, Sarah established an Indian school near the present site of Lovelock, Nev. After the school closed, Sarah traveled to Montana to visit her sister. She died there in 1891, and is buried at Henry's Lake, Montana.

Sarah Winnemucca was never a chief. Certain people felt she should have been, as she did much to enhance relations and understanding between her people and the white settlers.