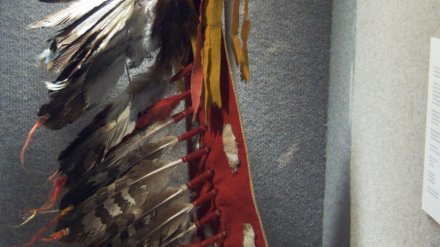 This war bonnet was worn by lame Deer, leading Minniconjou Sioux chief who was killed by general Nelson Miles' troops at Muddy Creek, Montana, on May 7, 1877, during one last pre-reservation deer hunt.

His relatives retrieved the headdress and it eventually was owned by three people in the family, each of whom died while in the possession of the headdress. Being superstitious, the family sold the bonnet to Isaac Kephart, who had started working for the Indian Service of the United States government in 1906 in Montana and Sourth Dakota. Kephart collected many artifacts, and retired to Paradise with his wife, Viola and family, in the 1930s.

Isaac Kephart's daughter, Blanche Schwartz, donated his collection to the Humboldt Museum, requesting they be put on display. The following members of her family have contributed to the display of this unique beaded and Western Indian collection: