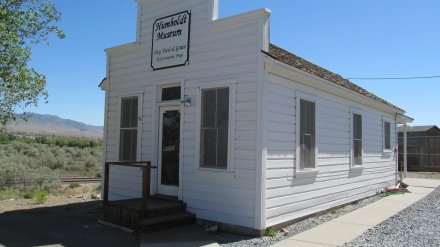 The Greinstein building, originally located on Sonoma Avenue in the Haviland and Hoskins Addition abutting a Western Pacific Railroad spur, was donated to the North Central Nevada Historical Society in 1982 by Sam and Louise Greinstein.  It is an 18'X35' building with its original shiplap siding and a boomtown front.  Sam’s father, Moses, moved to Winnemucca in 1902, bought the building and opened up the Nevada Hide & Junk Company in 1911.  In 1935 Sam’s father converted the store into a dwelling with three rooms including a kitchen in the back.  At this point the front part of the building was still used as an office while the business itself was housed in the large metal building on Paradise Avenue behind the former store.  Sam and his father continued to live in the former store until 1941 when they began to rent out the building.  The structure was used as a dwelling until 1954 when Sam Greinstein decided to change its purpose once more to a storage facility and preserve it for future generations.  It is believed that the Greinstein Building was originally constructed sometime in the 1880s.