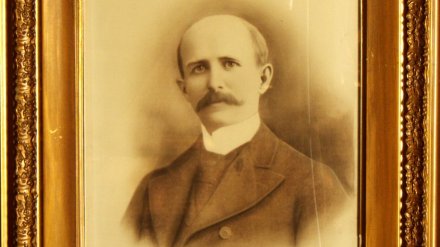 George S. Nixon was born on a farm near Newcastle, Placer County, California April 22, 1860.  He was educated in the public schools of that state and worked on his father's farm until 19 years of age when he entered the employ of a railroad company and studied telegraphy.

In 1881 he was transferred to Nevada where he was employed for three years as telegraph operator for the Carson and Colorado Railroad.  In 1884 he went to Reno where he was associated with the First National Bank, later known as the Washoe County Bank.

In 1886 he came to Winnemucca where with F. M. Lee of Reno he organized the First National Bank.  On January 29, 1888 he was married in the home of L. A. Blakeslee at Humboldt House, Nevada to Miss Kate I. Bacon.  With his family he moved to Reno in 1906 where he built an imposing residence on the banks of the Truckee River.

Mr. Nixon served as a member of the Nevada Legislature from Humboldt County in 1891.  He was elected to the United States Senate January 25, 1905 to succeed Senator William M. Stewart.  He was re-elected to the Senate in January 1911.

During the mining excitement in southern Nevada, Mr. Nixon became associated with George Wingfield and they reaped a fortune from the mines, organizing the merger known as the Goldfield Consolidated Mines Company.  They established the John S. Cook & Company Bank in Goldfield.

Senator Nixon was president of the Tonopah Banking Corporation, the Carson Valley Bank of Carson, the Nixon National Bank of Reno and the First National Bank of Winnemucca.  He had extensive realty interests in the city of Reno, in Winnemucca including the Nixon Opera House which he donated to Winnemucca as a parting gift to his home city and other parts of the State.  His estate was estimated at between $2,000,000 and $3,000,000.

Senator George Nixon died in a local hospital in Washington D. C. June 6, 1912 of spinal meningitis.  A Christian Science practitioner William S. Campbell was called into the case.  The funeral train bearing the remains of the dead statesman left Washington June 6 and passed through Winnemucca on No. 1 Sunday, the 9th.  Senator Nixon was survived by Mrs. Nixon, his widow, and son Bertram S. Nixon; a brother Rudolph M. Nixon of Loomis, California and two sisters Mrs. W. A. Donaldson of Oakland and Mrs. M. J. Threlkel of East Auburn, California.

Fifty or more Humboldt County residents went to the Nixon home for the viewing.  Senator Nixon's casket was placed in the Kaiser vault, Mountain View Cemetery, there to remain until a mausoleum can be constructed at the Masonic Cemetery.    From the "Silver State" newspaper June 6 and 13, 1912