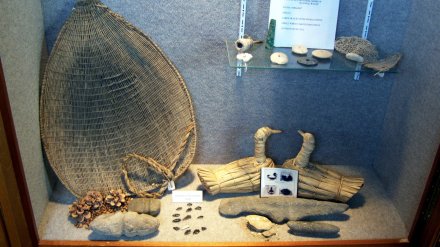 Lovelock Cave, 22 miles south of Lovelock, NV was first excavated for bat guano in 1911.  During the course of the commercial fertilizer operations many Native American artifacts dating back to 2000 B.C. were found buried in the substrata of the cave and were well preserved by the dry climatic conditions.  Soon many newspapers sensationally reported the cave to have been a shelter for giants.  A series of archaeological surveys of the cave were performed and determined that during its time of occupation, the cave had been a rock shelter overlooking Humboldt Lake.  The recovered remains of the inhabitants, although slightly more robust, were not beyond normal size parameters.  The Humboldt Museum once offered a display of some of the human remains found at what is known as the Humboldt Sink near Lovelock Cave.  In respect for American Indians and compliance with NAGPRA, the display was removed.  All human remains have been repatriated. HUMBOLDT MUSEUM DOES NOT POSSESS ANY HUMAN REMAINS OR FUNERARY ITEMS.

Among the artifacts found in the Lovelock Cave were the world's oldest duck decoys.  The original decoys are preserved at the Smithsonian Institute in Washington, D.C., while the replicas depicted here show how the decoys were constructed.

Other items in the collection include:

These artifacts have added much to our knowledge of the lakeshore culture.